To say that 2012 was my best year ever would be an understatement!  The pursuit of exploration and adventure has taken me to places I had never thought I’d be.  I’m left wondering, what will 2013 bring?

In January, my good friend Don and I went to the Northwest Territories on a 10-day, 3500-mile road trip.  You can read my feature article about that trip in the Dec/Jan issue of Photolife magazine.  The first image you see below was made the night of my birthday, January 19th standing on the frozen Great Slave Lake, probably about a mile or so out on the ice in the most miserable conditions I have ever experienced outdoors.

Bursts of greenish-blue color from the Northern Lights illuminate the night sky above the Great Slave Lake in Northwest Territories.

These are by no means in chronological order, so if you need to see things in the order they were taken, I’m sorry. 🙂

The image below was made as the moon was rising to the left of the frame, illuminating the landscape while stars were still visible.  This was about a 10-minute single exposure (not stacked) on the Alvord Desert in Southeast Oregon. 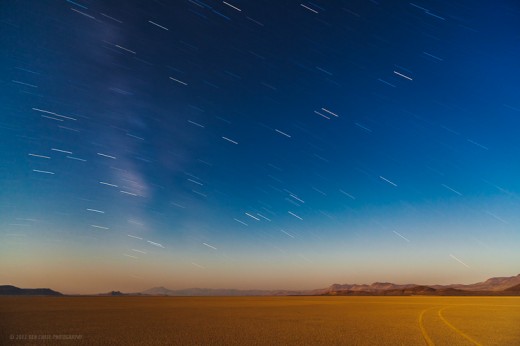 The stars and Milky Way galaxy are seen above curving tracks in the desert playa in the Alvord Desert, Southeast Oregon.

The lovely sunrise you see below was made on a trail in the North Cascades near Wing and Lewis Lake.  There is an interesting story on this trip which I will be sharing in a future post which some may find amusing! 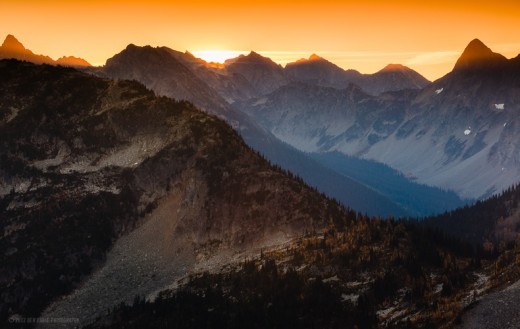 The sun slowly creeps over the horizon as seen from a trail in the North Cascades of Washington State.

This homestead image is near and dear to my heart for several reasons.  First, it was a friend of mine’s first trip with me on a photography expedition, and second, we found this 100% by luck while exploring the Cascade County area of Central Montana. 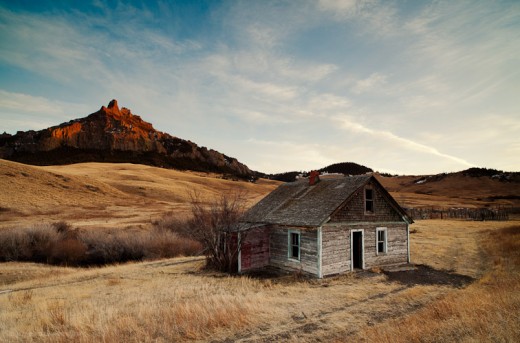 An abandoned homestead in Cascade County, Montana is seen near sunset with a warmly-lit mountain in the background.

I call the one below, “Storybook Lane”, and I’m not sure why.  As I was driving up the Fields-Denio road in Southeast Oregon, I saw this tree and fence next to the road with Steens Mountain in the background and was compelled to get out and look around to compose a shot.  As I was selecting the focus, a Golden Eagle flew into the frame and I waited for a split second for him to open his wings before I clicked the shutter.  It was like he intended to be in the shot!  Even if no one else ends up enjoying this shot, it will forever be one of my all-time favorites, just because of the experience! 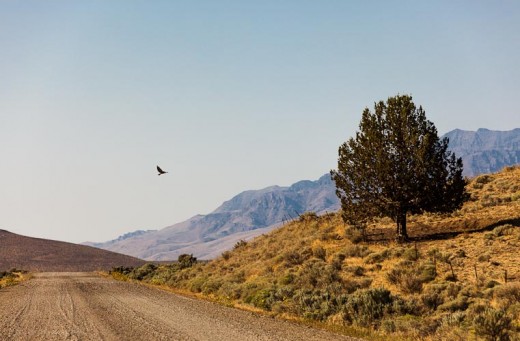 A golden eagle soars above a pastoral scene in Southeast Oregon along the gravel Fields-Denio Road.

During springtime, I made a trip over to the Columbia River Gorge area, spending probably an equal amount of time on both the Washington side as well as the Oregon side.  This was taken on the Oregon side, not far from the Rowena area while the Balsamroot was in bloom. 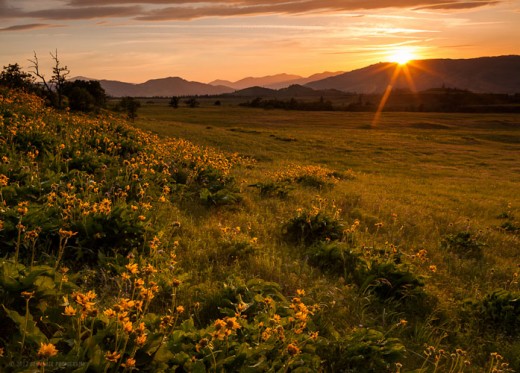 The sun descends behind the hills, casting its warm light among a grassy hillside covered in balsamroot flowers along the Columbia River Gorge in Oregon.

One thing I promised myself I would do this year is to make images that many would feel simply wouldn’t be possible.  I had more than one person tell me that trying to take pictures of horses under starlight just wouldn’t work.  In some cases, motion blur is totally natural and expected, this being one of those times. I waited for about a one-half to three-quarter moon and then drove into Montana toward Cascade County to make this as well as other shots under starlight. 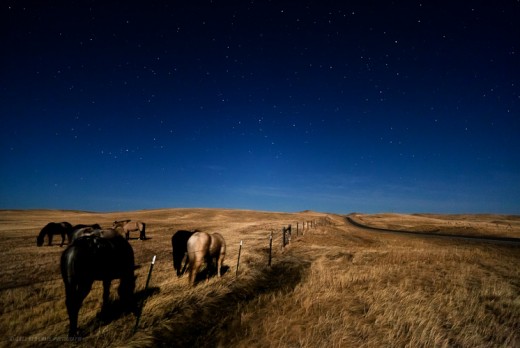 Seven horses gather along a barbed-wire fence in Central Montana under the light of a full moon with a highway stretching off into the distance.

The Maligne Lake Road in Jasper National Park is well-known for spotting wildlife at any time of year.  A light snow was falling and I caught this young moose creeping out of the forest through the snow in search of food.  I felt that a black and white conversion with some toning would really bring out the contrast of the snowflakes against the dark fur of the moose.  This looks fantastic on canvas as I just had a 36×24 made. 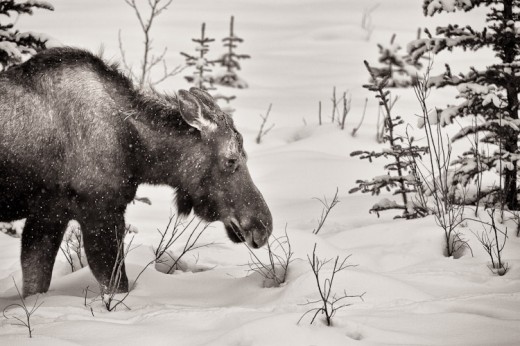 A young moose stands in the snow among the trees in winter.

This tang-colored guy was also spotted on the Maligne Lake Road in Jasper.  As with nearly all red foxes I have been in contact with, this one was pretty indifferent to my presence.  He went about his way, digging in the snow and listening for rodents tunneling.  As crazy as it sounds, I’d love to have a domesticated red fox as a pet!  My wife isn’t exactly on board with this idea unfortunately, so we’ll just have to make due with our German Shepherd. It’s just, that I read that a companion could help protect your dog from loneliness and all the problems that follow that. 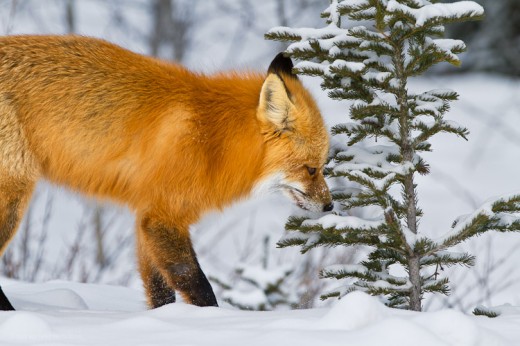 A red fox digs in the snow near a small tree in Jasper National Park near the treeline.

This year I started taking my son and daughter on short day trips to begin to help them learn some skills and get some experience in the outdoors.  A side benefit is the ability to shoot some outdoor lifestyle pictures of them as a part of it!  My son looked up in this tree toward a noise right as the sunlight peeked through the branches, creating a very nice rim-lighting situation that I saw immediately. 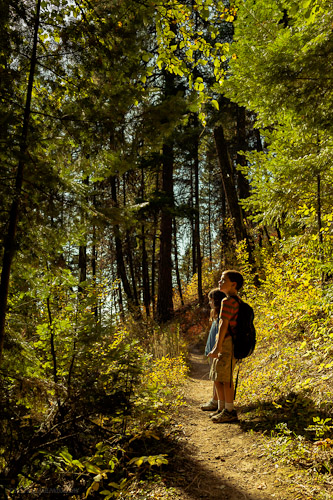 A young boy and his sister hike in North Idaho.

I look forward to 2013 with excitement, and I am already making plans for a trip into Yoho National Park, Kootenay Flats, and surrounding areas next week!

Thank you for taking the time to look at my selections this year, and please stay tuned by subscribing to my newsletter!