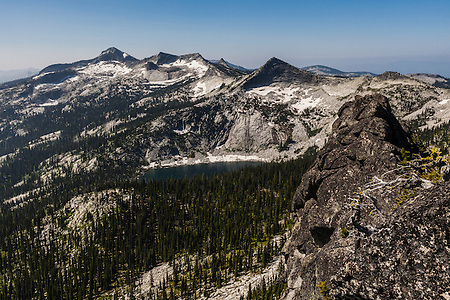 A hiker’s view just a few feet from the top of Harrison Peak in North Idaho’s Selkirk Range. Harrison Lake is seen below. (Benjamin Chase)

It’s becoming more and more difficult to find true solitude in the backcountry today, requiring more of a trek to reach places devoid of people. 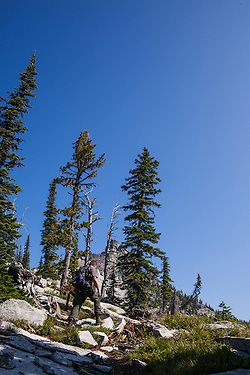 A solitary man carries a hip-mounted pistol and hand-carried shotgun for protection while hiking in North Idaho to Harrison Peak of the Selkirk Range. (Benjamin Chase)

Living in a sparsely-populated area in North Idaho, you would think that I would know the area I live in “like the back of my hand”, but the truth is, I’m guilty of not spending a lot of time in my area, preferring to travel to locations such as Montana, Wyoming, Oregon, or up North to a variety of beautiful locations in Canada.  This year, I decided to spend a little more time exploring the area where I live.

After some quick research on summitpost.com, I decided to head up to Harrison Peak with my friend.

While not a difficult hike, there is some steep cross-country hiking to the peak after you reach the lake.  This leads to a boulder field that I would recommend spending some time traversing to the eastern side instead of ascending on the western side, unless you intend a more technical climb.  Routefinding is not terribly difficult here given the visibility that you have once you’re near the ridgeline that leads to the summit.

With the tufts of cotton-like fur stuck to the small tree branches, I was half expecting to be greeted by some friendly mountain goats, but unfortunately there were none.

We didn’t summit the peak due to the fact the approach we made would have forced us to make a fairly technical ascent which we were not properly prepared for.  That being said, the views certainly did not disappoint from this height!  It was a beautiful clear day, albeit a bit windy at the top.  M spent some time putting waypoints into his GPS before we started back down toward the trailhead. 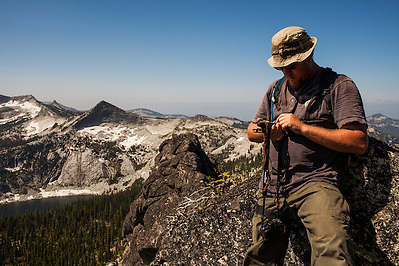 I was fairly convinced this was going to be a good place to explore without seeing a lot of other people as the trailhead is at the end of a fairly rough road.  While it wasn’t entirely devoid of people, we only encountered a few people on the way up (mostly at Harrison Lake), but on the way down I was shocked to find the trailhead surrounded by cars as well as a bunch of people heading up.

I guess everyone had the same idea we did that day.