Today I’d like to talk about something that I believe is very important in landscape photography. 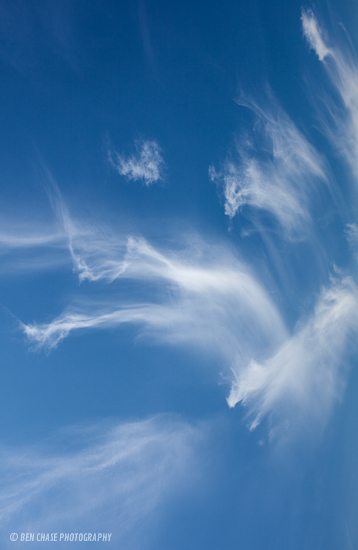 Naturally-occurring animal shapes in clouds adds a touch of drama to the sky.

I can assure you there are no “shenanigans” in the above photograph.  I’ve seen some pretty awesome clouds before, but never clouds that look like ghostly, ethereal animals materializing out of the water vapor!

Clouds can often add the finishing touch to what would normally be an ordinary photograph.

A few weeks ago, I made a trip to the Columbia River Gorge area bordering Washington and Oregon with the purpose of capturing wildflowers and the surrounding landscape.On this one particular day while I was in the gorge, I came across so many different varieties of interesting clouds in a short time that I could hardly believe it. 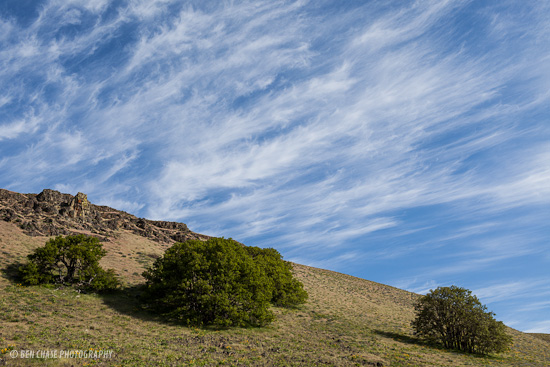 Mare's tails dance across the sky in the Columbia River Gorge.

All of the images in this post were taken within a 24 hour period.  If only most spring and summer days could be like this!

Out of all types of clouds, I would have to say that either Mare’s Tails or Nacreous (Mother of Pearl) clouds are probably my favorite.  Nacreous clouds are pretty rare, but Mare’s tails occur fairly often and have produced some of my favorite landscape images. 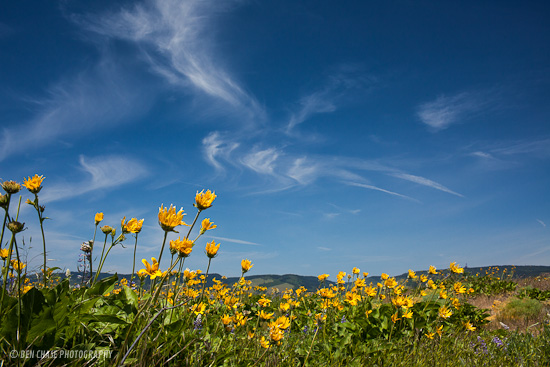 While this image of yellow balsamroot flowers would probably look good with just a blue sky, I believe the patterns in the clouds give it a finishing touch that works well.  I was lying on some rocks near these flowers so not to disturb them, but I have to admit I was very tempted to take a nap at this location.

The wind in the gorge area can be incredibly fierce, but fortunately we have modern DSLR sensors like the Canon 5D Mark II & 5D Mark III that perform well at higher ISO values, allowing faster shutter speeds. 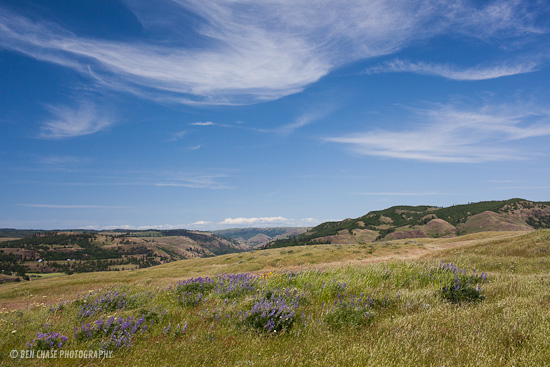 White feathery clouds decorate the sky above the Columbia Gorge on the Washington and Oregon Border.

I can only imagine seeing this landscape back before it was settled by non-natives, or being a member of the Lewis & Clark expedition into the West.  I have to imagine the members of the expedition were speechless upon seeing these lands for the first time.  How would you tell others what you saw upon your return home?  You can only write so many words for what one has to see with their own eyes.

Green foliage surrounds a cliff side at the Columbia River Gorge area.

Stay tuned for more upcoming work from the Columbia River Gorge area in the next week!

I offer three styles of prints for those who enjoy decorating their home or office with landscapes from the Northwest U.S. and Canada.

I can help you select artwork that matches a specific color palette to brighten up your space or a variety of black and white fine art to create the right atmosphere!