To my success or failure, there is one constant when it comes to what I choose to photograph.  It boils down to whether or not a particular trip I take contains an element of adventure.

Please don’t misunderstand me, I love seeing epic landscapes, wildlife in its natural element, and rural-themed agriculture scenes – but that’s not what truly drives me.  There has to be a spark of adventure to the trip, some element of risk, something that creates the environment where the unexpected could occur.  I have been on many trips where things didn’t work out photographically, but the experience was still memorable, and that is what is important to me. 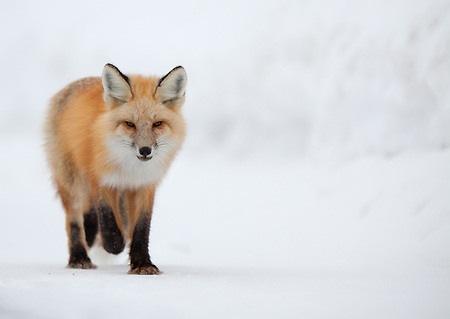 The picture of the fox was taken on a trip where things started out pretty poorly.  My good friend Don Pratt and I were making our first winter trip to Yellowstone and planning on driving the north road from Gardiner, MT to Cooke City, MT.  We were on I-90 about 30 miles outside of Missoula at 3am when we started to smell something burning in the vehicle.  What that burning smell ended up being was a transfer case that was in the process of disintegrating itself on the highway.  We spent the night parked in the parking lot of a service station after waiting several hours for the tow truck.  We secured a rental vehicle and started out mid-day on about 3 hours of sleep. About a half a day shooting was lost.

I could have complained.  I could have been angry at the situation, but I wasn’t.  Why?  Simply because I have found that when there is some element of “something going wrong” or some element of danger that is present, opportunities seem to present themselves more often.   If we had arrived when I had originally planned to arrive in Yellowstone, I would not be able to get any of the fox images that I did.  Some would chalk it up to coincidence.  I’ve been photographing long enough now that I don’t believe in coincidences. 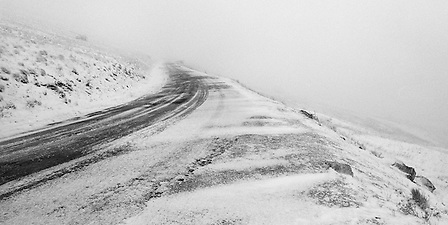 Winter photography, particularly when you’re in more remote locations, definitely has an element of adventure to it that drives me to it like a moth to a flame.  The idea of being in a blizzard with 60 MPH winds and driving snow makes my hair stand on end with anticipation.  Standing on a frozen lake looking for interesting patterns in the ice to complement some good light?  I’m there.  I want to be in the places where adventure is happening.  I don’t want to be where it’s nice and cozy – I want to be where I’m standing on the edge of my comfort zone thinking of how I want to communicate that element of adventure in my images.