The Palouse region of Eastern Washington state has been called the “American Tuscany” for its many similarities to the Italian relative.  Rolling hills and rich farmland are seen from horizon to horizon in this fertile landscape.  European-Americans first started settling this area around 1874, and Lewis and Clark first encountered the Palouse native Americans in October of 1805, estimating a population of around 1600.  The Palouse Indians were also called the Palus.

Today, a variety of grains are grown here, including both wheat and barley.  According to 2009 estimates from the Washington Grain Alliance, approximately 72% of the wheat grown in this region was of the common white variety, with Whitman County as the largest producer in the state. 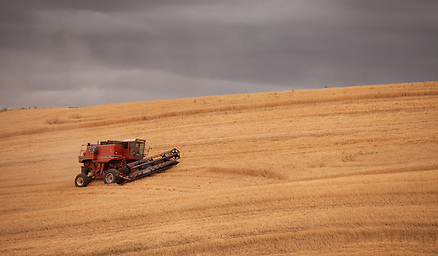 This combine works a large wheat field under the hot sun during the month of August in the Palouse of Eastern Washington.

Spring melts the snow-covered hills and transforms the area into rolling fields of green.  Some have indicated that under the right lighting conditions, the Palouse as seen from near the top of Steptoe Butte, looks like God’s golf course.  The summer brings temperatures into the 100’s, turning the wheat from green to its yellowish-tan color as it approaches the harvest season, which is typically in the last months of July and occasionally into early August.

With over a hundred-year history of the region, there are many aging and historic structures to be seen in addition to the beautiful fields of wheat.  One could drive hundreds of miles on the dusty farming roads and still not see all there is to see here.  Old family graveyards, collapsing farmhouses, and aging barns are a common sight.  Occasionally a dust storm will blow into the area from the winds. The combination of a layer of dust and the setting sun can produce images that are quite pleasing to the eye.  Thunderstorms are not uncommon and can produce some dramatic farmland scenes in the right light, such as in the bottom photo which I took on a particularly hot August day where thunderstorms had been forecast. 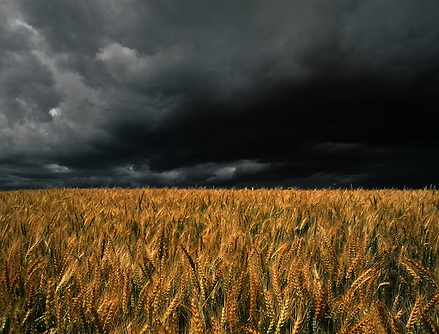 Wheat nearing harvest is lit in the front by the sun while a massive black thundercloud on the horizon looms nearby. Thunder rolls in the distance.